I just finished Stranger Thing Season 4 Volume 2, and it deserves a standing ovation.

This was probably the best season other than season one. I would love to watch many more seasons of this show. They really know how to pull at your heart strings and get you close to tears every season, and it usually happens on the last episode. But the show is a lot more than an emotional tear jerker. It’s also add sci-fi, horror, romance, action, and complex plots with multiple storylines that still make sense for young kids.

It’s usually the plot holes that get me to dislike a show, but I was able to suspend disbelief this time and just enjoy the adventure because there weren’t that many big plot holes. There’s a couple smaller plot holes. Slight spoiler warning: such as Eddie being able to last for such a long time against hundreds of bats when Steve and the gang couldn’t handle three without getting large injuries quickly.

And bringing people back from the dead is used too in the shows, which can make the show less believable, but in this case, I liked it. It’s hard killing off people, but it’s more realistic than never killing off any characters. Life has a lot of suffering, and it isn’t always happy endings, unfortunately. I love the optimistic or bittersweet endings they tend to aim for on this show.

And for despite all the super powers of this evil alternate universe, one of the biggest plot holes is that this otherworldly super-powered demon bent on destroying the world has only managed to kill off a few teens after four seasons, not much when you compare it to the death toll of world wars.

This show just was amazing nonetheless, and I think it rightfully deserves its place as a cultural icon of the last decade. The editing, the pacing, the emotions that just get you to want to cry, it’s multiple levels above the standard Netflix Original quality. I got so invested in the characters that I wish I could be their friends. I got so inspired by the story that I was inspired to make my own TV series or film one day. The coolest part about the show is how relatable it is. The monsters and sci-fi is fun, but the characters all have struggles and issues they’re going through; most of them haven’t figured it out and aren’t living a perfect life. They’re dealing with bullying, an abusive family, a family death, long distance relationships, trying to find a meaningful relationship, trying to figure out what they like, worried about losing someone, at least one of these things you can relate with. 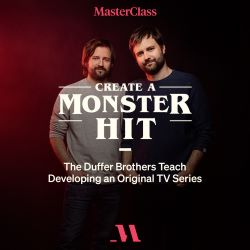 And the best part is that the Duffer brothers, who directed the series, have released a MasterClass.com course on how they direct and made Season 4 and the show. As you know, I’m a huge fan of Masterclass.com and mention it often because it’s packed with high quality content from credible people that can change your life. On the platform, you have all these celebrities and the #1 people in the world teaching courses for an affordable price. From someone who has paid thousands of dollars for a single a course from one guru, masterclass.com is so worth it and the price is just so affordable that it’s a steal. It’s such a steal that I think they may increase their prices soon. It’s basically the Netflix for personal development. Check it out and use my affiliate link for a deal.

The courses are so worth it. They’re usually equal value to what you’ll get from one guru charging $1,999 for a course. Yet you get hundreds of teachers, including Malcolm Gladwell, MKBHD, Ninja, Steph Curry, Usher, the CEO of Disney, and the list goes on, all for a much more affordable price per month.

$15 a month. Are you kidding me? Here’s the thing, there’s still plenty of influencers out there charging $300 to $3,000 per online course or conference ticket. And people pay for them. I do. That’s because they’re the experts on the web at charisma, communication, dating, negotiation, online business, making money online, whatever. And there’s nothing cheaper on the market for a reasonable price. You’ve probably seen some ads or you will if you’re on the web long enough. Some of those courses were worth it. Some I’ve reviewed on this blog were worth it, some could’ve been better. But the point is that I got a lot of value from the courses I purchased, and I got an equal level of value, if not greater, from Masterclass.com. The $15 a month is such a steal, so I’ve been waving my hands saying get in while you can. I have a feeling they’ll figure out these prices are too good and raise them soon enough.

I’m Will Chou. I share the lessons I learned from studying the most successful people and businesses in the world to help you reach your potential. Learn more.